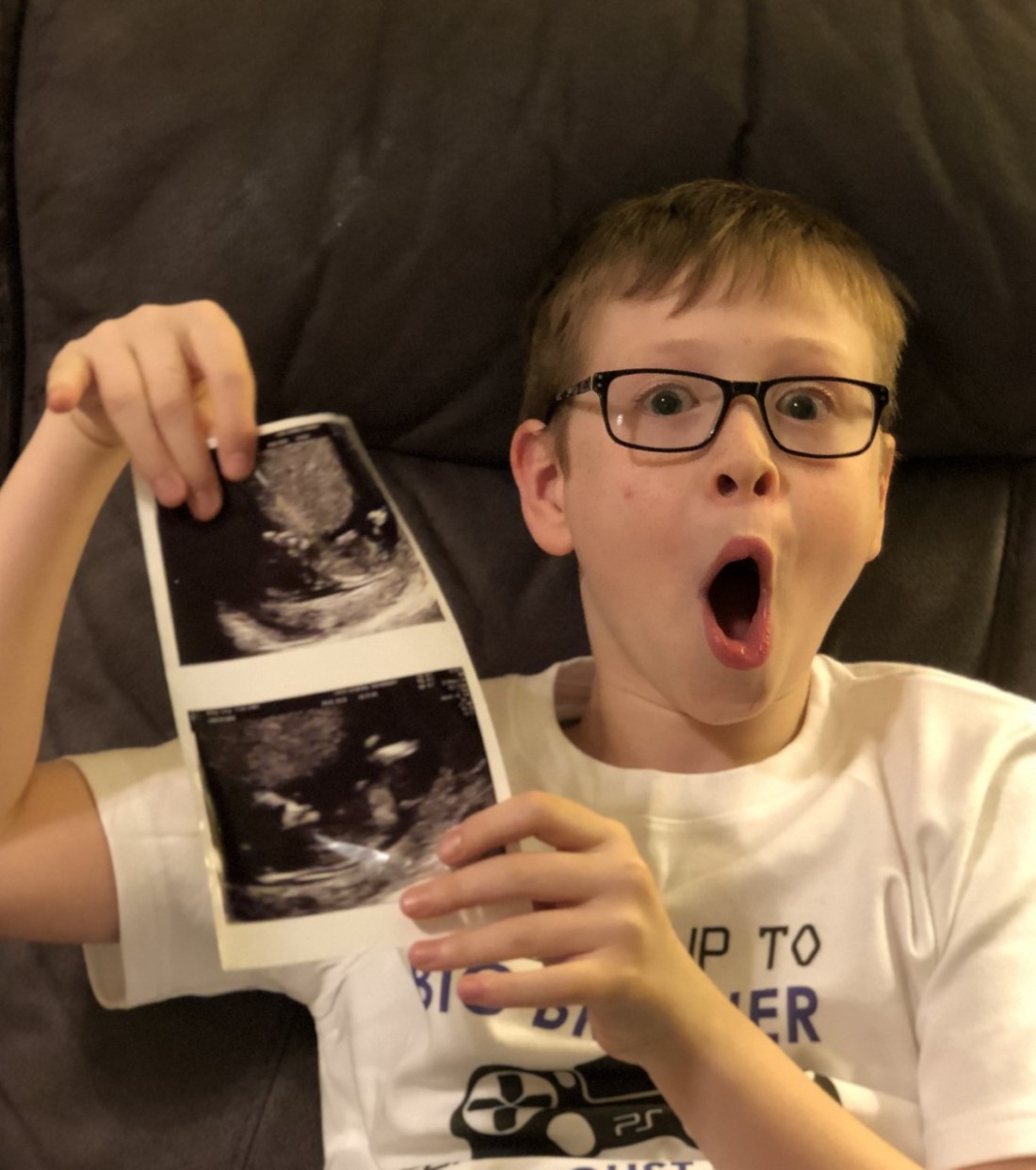 We are very excited… now that we have overcome the shock.

We have always been very honest about our journey; the good, the bad, and the ugly (crying). So we thought we would share our little snippet of news and shed a bit more light on the situation, as more than a few people may be a bit surprised by this!

(Apologies in advance, this is a very long, very hormonal post. Feel free to skip to the bottom to the cute pictures of T and new baby Riley…)

Where it all began…

When J and I had been together for about 6 weeks, I received news from the GP, off the back of some standard blood tests, that I would find it nigh on impossible to ever conceive a baby. Apparently I was ‘missing’ some kind of vital hormone. This is not a fun conversation to have when you have only been together 6 weeks. I mean, to be fair, its not a fun conversation to have at any point; but as the majority of our relationship had thus far involved the mutual selling of mobile phones (in the shop where we worked, not in a dodgy ‘Del Boy’ back alley kind of way) and J seeing me in various states of drunkenness dressed as a Ghostbuster/Geordie Chav/Cowgirl (delete where appropriate) as I was still at uni, this was somewhat uncomfortable and very (seemingly) forward thinking. Luckily for me though, he didn’t go running for the hills, and instead comforted me and offered me support like the amazing human he is. A few years on, still going strong, neither of us saw T coming – literally to be fair, even the midwife nearly missed him in labour. He snuck up on us like a stealth ninja. But the best stealth ninja ever. Clearly that ‘missing’ hormone wasn’t as important as everyone thought! And so, T came into our lives. And we were over the moon.

As time ticked on, we started thinking about siblings for T. As my reproductive system clearly kicked ass, we didn’t think this would be an issue! How wrong we were. After many, many, MANY appointments we were eventually referred to the IVF clinic. I will never ever forget the day we sat in the consultants office and he told us that there was no possible way we would ever have another child. It turned out, that I had been through the menopause. I was 28 at the time. To add further insult to injury, it would appear that I wasn’t even in the process, I’d come out the other side. I had old lady ovaries. There was nothing that could be done… except whack me on HRT and turn me into a hormonal psycho. J had a thoroughly enjoyable time during this phase (please detect note of sarcasm). Nothing gave him greater happiness than returning home to find me crying over a sock. Or me trying to hit him with said sock*.

Prunes do not make good ovaries…

At the ‘Menopause Clinic’ (not as weird as it sounds to be fair), I was told that it looked like I had probably started the old ‘meno’ process straight after puberty. That would totally explain the hot flushes age 15… I was offered counselling, which I declined, and continued the rocky (for J – haha) road of finding the right HRT combo to keep me well. If I failed to take a steady course there would be an extremely high chance I would suffer a stroke or a heart attack before the age of 45. It really is the gift that just keeps on giving.

It took me a very long time to come to terms with this. Mainly, I felt guilty for being upset, as so many wonderful people struggle to conceive even one baby, and here I was breaking my heart over not being able to have a second. Please don’t think that this was because I wasn’t grateful for T, because I absolutely was and he was (and continues to be) the light of my life. It just felt, like I was grieving for something. Which I’m aware seems a very odd explanation. I also did not respond well to the HRT at all. I just didn’t feel like myself. I felt like I existed in a fog. I am forever thankful for the support of my incredible family and friends during this period. And to J, and his never ending patience.

After T’s diagnosis, I (stupidly) took myself off the HRT (great plan there Lucy) as I felt that I was experiencing far too many real emotions to cope with additional fake ones shoved in. When I realised how stupid I was being (and several people told me how stupid I was being) I started taking them again. Man alive, that was a rollercoaster of a few weeks while I readjusted. J more or less moved into his office. I was like a psychotic beaver crossed with Eeyore from Winnie the Pooh.

In the midst of all this, I was sent for an ovarian scan as there had been some potential signs of ‘egg life’ (I’m aware that I sound like a science experiment. To be honest, at some point I suspect medical science will have a grand time sorting through my bat shit crazy insides). We were hopeful. The lady who performed the scan was incredibly kind; like a real life Mrs Potts from Beauty and the Beast… but not a teapot, obvs. She talked to me throughout, and then she held my hand when she delivered the results. There was not a single egg follicle. I had 75 year old prune ovaries. They had already retired and moved to a condo in Spain. Cheers, ovaries. You twats.

The addition of the Crohns card…

The past couple of years, we’ve just trucked on. Obviously with everything going on with T, all of this menopause/hormonal shiz has been pushed to one side. I FINALLY found a HRT combo that didn’t turn me in to a nut job (hurrah) and you know most of the rest, if you’ve been keeping up with our adventures. However. A few weeks before Christmas I started feeling nauseous at random points throughout the day. It would never last long, just a few minutes at a time. And it was getting gradually worse. Now to confuse everyone further (and to excite those Medical Scientists again about my weird body), I also have an illness called Crohns Disease. Its a bit complicated. So I shall rely on my good pal Google to explain:

I was diagnosed at 18. Without wanting to sound like a total drama queen, I have been pretty ill in the past with this bad boy. It a bit of a bitch. I’m missing a good chunk of my intestines and my appendix once disintegrated. Luckily though, thanks to some amazing Drs, some decent surgery and medication, plus the most AWESOME lady named Linda, I have been more or less stable for a decade. I’m not 100% and I never will be, and some days are better than others, but on the whole I’m good. Up until very recently, I would make 4 1/2 hour round trips back to Darlington to see my specialist care team there. Mainly because I trust them. (Plus, I miss the North East accent. I like to hear other people say “boooook” and “coooook” like me. I’m very proud of my North Eastern roots don’t you know!) But those 4 1/2 hour round trips are not practical now, with us trying to facilitate T’s appointments too. I was cancelling left, right and centre. So I decided to move my care to Hull. I was due to see my new specialist the week after New Year. On Boxing Day, the nausea had become so bad I was convinced I was on the cusp of a massive Crohns flare up (these are not fun). I told J about my concerns, and also that I was worried ‘new specialist guy’ wouldn’t investigate said sickness as I am of ‘child bearing age’. Honestly, you can go to the Dr with a twisted ankle, and they’ll still ask if you are pregnant. It doesn’t matter how much you explain that it cannot happen, they still insist on carrying out a blood test to check. I was worried that at this point, it would then be another 6 months before I would see the consultant again, and I would probably have been hospitalised before then.

The surprise of the century…

I had a pregnancy test in J’s car (occasionally, I have neurotic moments where I live in perpetual hope – this was the remainder of one such moment. I know I am weird.) and so I told J I would do said test, photograph the negative result and show the consultant so that my sickness would be properly investigated there and then. And so off I trotted into the toilet with my little pee stick.

And bugger me, it was positive.

I don’t know who was more surprised, me or J.

I cried. J drank whisky. We looked at each other. J looked at the test… then realised he was holding a stick covered in my wee and promptly dropped it. We cuddled. And we sat in total shock.

I did another test the next morning… positive again. We couldn’t work it out. I went to the Dr the same day…

Yeah cheers for that Doc. I was kind of hoping for a few more answers to be honest!

“Its a Christmas miracle!”

That was the best she could come up with.

No-one can explain it. Not the Dr, the Midwives, my Consultants. No-one.

And so here we are! Our little ‘Christmas Miracle’ has been cooking away merrily for 13 weeks, and so far, so good!

We have many bumps in the road ahead, but for now, we are feeling eternally grateful to be blessed with not just one amazing miracle baby, but two.

We are the luckiest family in the world. Fact.

And of course, if you want to accompany us on this leg of our journey, you are more than welcome. 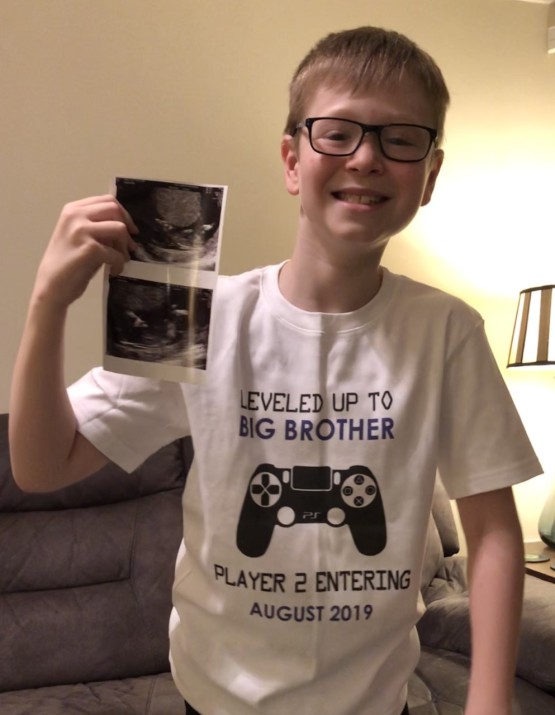 *It may have been items somewhat harder than a sock. Don’t judge, it was the ‘mones. And he still loves me.

3 thoughts on “A Christmas Miracle.”