Following the advice of our medical team, we recently spent a considerable amount of time filling out forms to apply for some additional support for T; and to help us to continue to make adaptations to our house/general every day life. The forms were incredibly personal and very hard to complete. Now when I say hard, I don’t mean that they were full of long words; more that it was a bit of an emotional rollercoaster. Re-living events of the past 12 months, and describing some of T’s darkest times in immense detail for a stranger to read and make a judgement on, is not fun.

“Whilst I accept that T may need some extra help and may need pain relief due to muscular spasms at night, this is not outside the help normally needed for children of the same age.”

“I appreciate that T may at times become anxious and frustrated however this is not uncommon for children the same age.”

Now apparently we can appeal. I rang the number on the letter and spoke to a most helpful young man (I am assuming he is young as he had a youthful tone to his voice) named Dan. Dan informed me that we can gather as much evidence and as many supporting statements as we like and send them in by the specified date.

“Would you like me to send you out a second class envelope to submit your evidence Mrs Riley?”

Ah Dan. You have no idea who you are dealing with here my friend. A second class envelope will not be needed. I shall be sending in my evidence with police escort and as many bells, whistles, dancing ponies, marching bands and flamenco dancers as I can get my hands on. Appeal? Oh there will be an appeal. An appeal like the world has never seen. An appeal to end all appeals…

Dan thinks I’m bat shit crazy. But he also applauded my efforts and determination. I think Dan gets the rough end of the stick quite a lot. If you are reading this Dan – hang on in there! We value your perky optimism and youthful tone!

The thing is, this isn’t about money. To me, this is about someone making an unfair and incredibly snap judgement about my wonderfully brave and inspiring son. I’m aware that my emotional investment in this situation is somewhat overwhelming here, however, how can someone deem that a child dealing with all of this is ‘not uncommon’?

T has been sent home from school quite a few times over the past couple of weeks as a result of some rather nasty falls on the playground. We are finding it increasingly hard to allow T the independence to play and enjoy himself with his friends, without wrapping him up in cotton wool 24/7. Finding the balance is tough. Its also tough to accept that as things continue to decline, he will continue to fall. We think it would hurt him more however, to stop him from playing with his friends and just ‘being 9’. Not every adventure will result in a fall. But for the ones which do, we will be here; ready with cuddles and tissues to wipe away the tears. And chocolate to fatten him up and provide extra padding.

Something else which we are hoping will help T, is that his lovely specialist nurse is going to talk to his class. We have spoken to T about this at length, and although he doesn’t like people asking questions and drawing attention to his ‘shaking’, he has also started to acknowledge that things are more noticeable now. We are hoping that after this talk, T’s friends will understand things a little more, that T will stop being faced with upsetting questions, and that ultimately he will feel happier. J and I have also drafted a letter to send home to the parents of the children, as we feel its equally important that they have an understanding of the situation. There are links to the blog and to the Ataxia UK website. Hopefully this way, they are able to answer any questions and I will also stop terrifying them whenever T goes to a party by carrying out a full risk assessment and asking about stairs/walking/uneven paths/shaking/falling/tripping etc…

So there we are. Thats our recent news. And to finish, here’s some pictures of T. Just being 9. 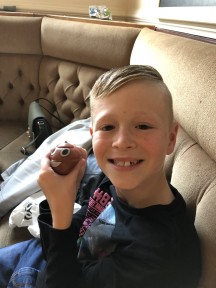 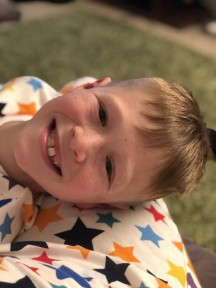