Its been a busy couple of months in the Riley household! I’ve had my show on at school which means that between growing this teeny tiny human in my uterus, rehearsing at school and snuggling my family, I’ve basically just slept for the remainder of the time… hence the lack of posts! However, I am now post-show and back in the real world!

In the short months since Christmas, quite a lot seems to have happened in the Life of Rileys – but also not a lot at the same time. T seems to have stabilised a bit, following a bit of a low emotional period just after Christmas. Everything seemed to get on top of him a bit and our normally happy, cheery, positive boy was struggling. Luckily, his team have come through again and he is now receiving additional emotional support for this giant rollercoaster which has become his norm.

His school have, yet again been INCREDIBLE, but we are having an increasing amount of discussion surrounding the evidencing of his work. T is a bright little button (too bright for his own good sometimes!), but due to the decline in his writing, he now more or less relies on dictation or a laptop to evidence his school work. This is both frustrating and tiring for him. Chuck into that mix that he is also a 10 (!) year old boy and it makes for a tricky cocktail. The fluctuation of T’s conditions also mean that some days he can be more tired than others so his work rate will consequently be effected. Now the government, in their infinite wisdom, do not really take this into consideration much; and instead place the same never-ending amount of pressure on the school to get T to produce the same amount of work as his peers. Which, quite frankly, is ridiculous. His teachers are being incredible, but we are all desperately trying to formulate a plan to support him as the dreaded SATS loom over the horizon next year.

You may also recall, from earlier posts, that we have been awaiting an Education Health Care Plan for T. It has now been almost 7 months and it is STILL not in place. Not through any fault of the school I might add. This has meant that the school have been receiving no funding at all to provide support for T; instead, stretching their existing staff and resources to do so. Things finally seem to be moving in the right direction, and the school have been awarded some ‘interim funding’ (AT LAST) while we wait for the final plan to come through. This means that an additional staff member can be brought in to deliver physio sessions each morning. Hurrah! I must once again commend T’s school for their unwavering commitment to his education, physical and emotional well-being. At a time when we are starting to look at Secondary Schools (someone cradle me while I sob please), we all wish now, more than ever, that he could complete the remainder of his school days under their outstanding care. It is experiences like ours which Ofsted to not seem to recognise, or deem to be important; which is a disgrace to educational institutions across the country.

On another educational note, T has been elected to represent his school as part of an ‘Educational Academy Trust Board’. He attends termly meetings with representatives from other Academies in the Trust and they discuss how to better their schools, and, education as a whole. The do so over an, ever so British, ‘Afternoon Tea’. He now basically thinks he’s Barack Obama. He has a special ‘lanyard’ which he wears everywhere with immense pride. I’m still not overly convinced that his proposal for ‘more break times’ will go through though…

In shock news, T is now 10. 10 YEARS OLD. A decade of T. And what a bloody awesome decade it has been! He’s had more birthday celebrations than The Queen this year – 3 official events to be precise. A play afternoon and tea party with his friends, dinner out with J and I, and then a trip to Pizza Hut with one of his best mates too. He LOVED it.

If there was ever a dude who deserved a fuss on his birthday though, its this guy. The concept of a ‘party’ however, initially threw up some quandary. All of the activities T has previous loved, and embraced for his birthdays: football, climbing, trampolining etc; are just not suitable any more. When he suggested a play date at home with his friends, this seemed the perfect solution and they all had a whale of a time dancing between the garden and Nerf / Fortnite wars in his room.

This is a general issue we are facing now though. What activities we can do, and places we can go where he won’t feel left out. Over half term, my lovely cousin came to stay with her awesome small people and I spent HOURS trying to find somewhere not too far away (T’s spasms play up if he’s in the car for too long), which was Mean Machine (wheelchair) friendly, and also somewhere all 3 kids could enjoy. We settled on ‘The Deep’ in the end. An aquarium in Hull. I have to say, the disabled facilities there were amazing, and T was able to access all of the attractions in the same way as A and Z. We had lots of fun seeing the different animals – particularly the penguins. They had a ball. The kids that is, not the penguins. Although they looked pretty happy too!

We also ate out, went to see a film in the awesome new ‘luxe’ cinema (reclining in the cinema is the future), and picking out boats on the Marina. 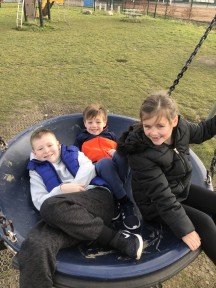 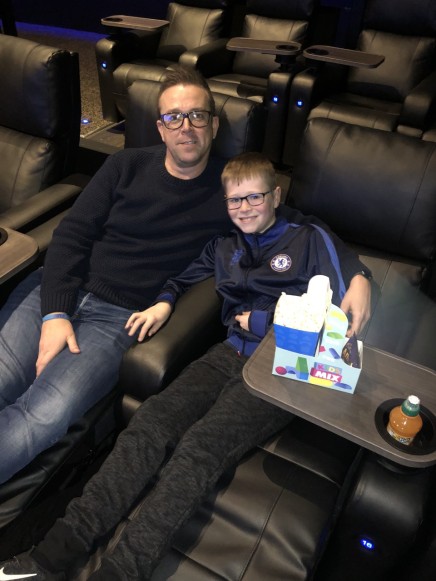 I’m now racking my brains for Easter activities. Suggestions are more than welcomed! There’s only so many trips to the cinema you can make, and only so many ‘walks’ you can go on (and honestly, how many 10 year olds actually want to go on a walk?! Even when being pushed!). The park is bitter sweet, as he can access some of the equipment, but is limited. So this is me touting for ideas. Send them my way! I want this awesome little human to have the best Easter Break ever.

You will all be pleased to know, I now also have a more practical car! Despite my best efforts to persevere with Maurice, my beloved Fiat 500. It was just not to be. Especially as I now need to shoe-horn a pushchair AND a wheelchair into the boot. Poor Baby Riley would have had to be strapped to a roof rack. T’was the only way it would work! So, now that the government have acknowledged that T’s condition isn’t fabricated or causing issues ‘which do not differ from other children of his age’ (honestly that still makes me angry), they have granted us some Mobility Allowance. So, I can now proudly introduce…

KEVIN THE QASHQUI! Or, Kevin the Q-Shaggy as my Mum calls him. Why Q-Shaggy, I have no idea. Apparently this is the correct way to pronounce it according to Lynn.

RIP Maurice. You were a minty dream, but alas, not the dream for us.

Kevin and I are slowly forming a bond, although he’s got a fat ass and its like parking a bus. But still, I’m sure theres things about me that he’s not keen on too, so hey ho.

So thats our news! I now desperately need to remove myself from this sofa and do something productive… probably shower and then put fresh PJs on. Rock and Roll lifestyle at its finest.

One thought on “Funding, Q-Shaggys, T Obama and… Penguins.”