HAPPY NEW YEAR! – I’m aware that we are very late to the party here, but it feels like we haven’t stopped these past few months. Happy Christmas too! Totally didn’t realise it had been so long since our last update… heres a festive picture to make up for our lack of content!

Hope everyone had a lovely festive period and a great start to 2020.

If you follow our Facebook or Instagram pages you will have seen that T had a rather successful end to 2019 as he won a Hull Daily Mail Golden Apple Award! He was nominated in a category called ‘Against All Odds’, which was for students and teachers who overcome adversity to achieve in education. He was so so nervous before hand but informed us:

“It doesn’t matter if I win, because everyone in this category is amazing!”

We were absolutely over the moon when he won! We had a lovely afternoon at the awards with his SENCO from school, Miss Evans.

T has also been making real strides with his swimming lessons. When he first started swimming it was purely to try to strengthen his muscles, and keep them strong for as long as possible. I remember asking Suzanne (the lovely lady who runs the school) if she thought T would ever be able to swim un-aided. She assured me he would, but truth be told, I never fully believed it. Well bugger me, he’s only just passed his bloody Stage 6. STAGE 6! He is now confident and happy in the water. Sportsability Swim School truly are amazing. Claire and Jo (his teachers) invest so much into T and his well-being.

We were also lucky enough to receive a visit from Rebecca and Leanna from Ataxia UK. They made the journey north from Watford (hopefully they have recovered) to interview us for the Ataxia magazine. They also went to T’s school to meet with him and to explore how the school supports his needs. It was nice to be able to put faces to names, as we (particularly J) have been actively involved with Ataxia UK since T’s diagnosis. It has to be said that both Rebecca and Leanna were completely wonderful, and we are honoured to have been asked to feature in the charity magazine. They have also given us food for thought as a new paediatric centre for Ataxia has opened in Sheffield. This is much more feasible for appointments than trekking to London (I don’t even want to think about the Mean Machine on the tube), and so we are hopefully going to try for a referral. Although we are aware that there is currently no cure for Friedreichs Ataxia, it would be nice to see a specialist in this area to ensure we are doing everything possible to support T. The lovely ladies from Ataxia UK also brought Baby Riley his own little ‘Hope Bear’ and he was rather taken with it – and them! He’s such a little flirt. 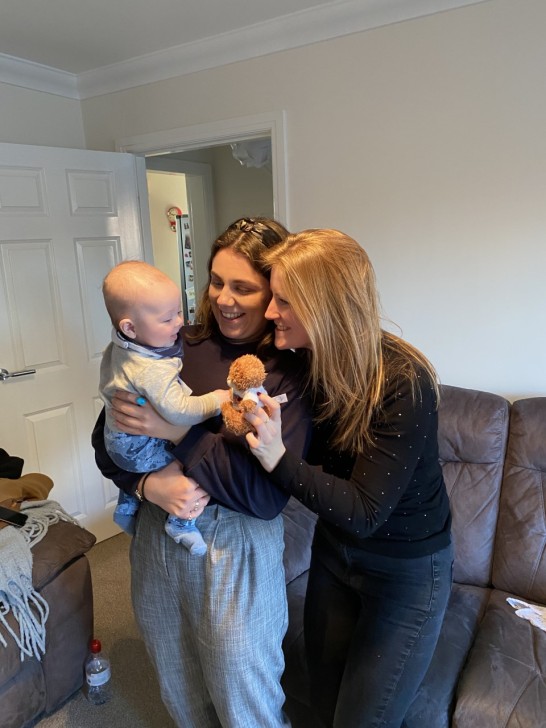 In further education news, we had a meeting at T’s school last week to review his progress. Evidencing his work is still proving to be difficult. However, we seem to have an additional blockage in this particular area. This is commonly known as being a 10 year old boy. Play Fortnite? Absofrickinlutely. Catch some Pokemon? Gotta catch em all! Do your homework and complete writing tasks at school to the best of your ability? Oh, I’m so tired…

I mean, he’s 10. Find me a 10 year old who doesn’t swing the lead a bit. It does make things incredibly tricky for his teachers though. So, we have had a frank conversation with T about this, and we will be tracking his effort levels and communicating every week with his teacher. Weekend device time is up for grabs. Something tells me that we might just see a bit more effort going forward!

The school, yet again, have been AWESOME. I just wish they would take me up on my request to add on a ‘Secondary School Wing’ so he can stay there!

Emotionally, the past few days have been quite tough for our little T. Its been one of those times when his Ataxia has smacked us round the chops and made it’s presence felt. It’s been brewing for a while, but started to come to a head yesterday. He was out playing football at lunchtime (he uses his walker to get to the football area, and then stands next to it to play, lol) and had a fall. One of the T.A’s who work with him caught me when I picked him up and told me that he had been really upset about it. T said that he had been in goal and had let a few goals in. So, he then moved to out field… which didn’t go too well either. He then had a fall. The same thing happened again today. His F.A. effects his coordination and balance, so things like this are always going to be tricky. He asked if J would give him some football lessons to make him ‘as good as his friends’. I nearly cried on the spot. It was one of those situations we sometimes find ourselves in, when you don’t want to lie, but you know that the truth is going to hurt. We discussed that his F.A. is going to make some things harder for him, and that unfortunately, it is not going to change. I also told him that it is part of who he is, and that we would never ever want to change him. He said that he “could still be himself, even without the Ataxia”. He doesn’t want the Friedreichs Ataxia. We don’t want the Friedreichs Ataxia. Or the Cardiomyopathy for that matter. But, it’s the hand we have been dealt. Man alive though, thats a tough hand to deal with when you are 10. Tonight, we have cuddled and encouraged him to talk. We laughed at his baby brother trying to eat broccoli. J built lego with him and I gave him cookies. He turned to us and said: