Well. This week has been one of high emotion for young Mr T. On Monday we went for a wheelchair review, as the old Mean Machine is now almost contorting his newly elongated frame (seriously, he looks like Mr Fantastic from the Fantastic 4 nowadays – he’s SO TALL). He has a slight curvature of the spine now (cue another new specialist) and so anything which effects his posture in a negative way is not good. The review of the MM has been a long time coming, I would like to point out. I have been trying to get an appointment for said review for over 3 MONTHS. His lovely Physio and OT have also tried… with no avail. Eventually a very nice lady named Sandra* informed me that they “have a new system, and he must have been lost in the transfer. Its an easy thing to happen”. Well Sandra, thats bloody brilliant. I shall remember that when I have to cut said wheelchair off my child because he’s fused to the bastard frame.

Anyhow. Sandra then made me an appointment. So, T and I trundled off to NRS and met with 2 very lovely members of staff who concluded that T’s chair was too small for him (GIVE ME STRENGTH) and that he needed a new one. Now as it happens (and it never usually does happen this way I can assure you), they had a chair in stock which was the right size for T, and so they fitted it there and then (we had to wait a month for his previous one) and off he cruised in the Mean Machine – mark 2. The minute he sat in the new chair, his posture improved (HURRAH!) and he was wheeling about like Lewis Hamilton. Halle bloody Lujah! Trying to fit the new chair into my boot whilst 7 months pregnant in biblical rain is another story, but we got there in the end and off we scooted.

On the way back I noticed that T was very very quiet. I asked him if he was ok, and he reassured me that he was… as his bottom lip quivered and a tear streaked out of his eye. I asked him again what was the matter…

“I wasn’t expecting them to take it.”

It took me a moment or two to realise he was talking about his old wheelchair.

“I thought I’d have at least another month with it!”

I explained that his new chair was exactly the same, just bigger and that his old one was making his back poorly…

“But Mum, it was a MEMBER OF OUR FAMILY.”

Bless this child. Only T could form an emotional attachment to a mobility aid.

Well, what can you say to that? I’ve never had to deal with separation anxiety from a wheelchair before. The best I could come up with was…

“Shall we go for a hot chocolate?”

When I sat back and thought about it though, I think the issue wasn’t necessarily losing the chair, it was the fact that he wasn’t expecting it to go there and then. He hadn’t prepared himself for it and it threw him. T-Dog copes so well day to day with everything thats thrown at him, that its times like this when little tell tale signs sneak in that maybe he is struggling with some of the emotional aspects of his conditions.

As it happens though, this is an area which T has recently been gaining some support in. Over the past few weeks he has started some ‘Art Therapy’ with a very pleasant chap named James who has a voice like melted Galaxy chocolate. James has been assessing T, and will provide a mixture of 1 to 1, and family sessions to help T express some of his more deep rooted emotions. Emotions which he probably doesn’t even know he has! So far T is loving the sessions. He leaves happy and makes a point of telling us that “his sessions are private and he doesn’t have to talk about them”. This has definitely made me and J feel happier knowing that T trusts James the Therapist so much and that he has an outlet to deal with these mammoth events taking place in his life. I do find it incredibly frustrating that I don’t know what he’s saying though… I mean, I know thats the point – that the sessions are for him to discuss whatever he wants to… but… I WANT TO KNOW! I can’t help it. Its the Mama Bear in me. I want to know whats troubling him and then make it better. Except, as we have deduced over the past 18 months, there’s so much of this situation I can’t make better. No-one can. It fights against every maternal instinct I possess. So instead, I shall feel content in the knowledge that in tomorrow mornings session, T and James the Therapist are making puppets and putting on some kind of performance, which T is very excited about. I guess they may give J and I a shout if they need some extra characters… but I think T can handle this show on his own. Even if I would be a bloody FABULOUS addition.

If you follow our Facebook or Instagram pages you may have noticed that J has been running … ALOT. He has been raising money for Ataxia UK by completing a number of half marathons and 10k’s (12 events in total throughout the year). He’s seriously giving Forrest Gump a run for his money, and T and I (and Tinker the bump, of course) are completely in awe of his dedication. So far he’s raised over £1700 and still has a number of events to go.

Our family and friends have also been rallying round to raise money for Ataxia UK. Us Rileys’ are completely overwhelmed by the support people have shown and the lengths they are going to to raise money to help to try and find a cure for T, and others like him suffering with F.A and the many many other types of Ataxia. We are surrounded by the most wonderful network of people who have not only participated in events, but also donated money. Fundraising so far has included: 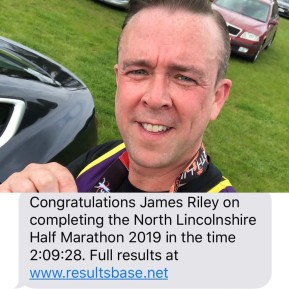 There are probably lots more amazing people I have missed from the above list (apologies if so!) but please know, that we are eternally grateful for every penny raised and every ounce of effort you have shown.

T and I have been so inspired that we are actually completing an event of our own! Now, it has to be said that at 8 and a bit months pregnant and with T in his wheelchair, we are somewhat limited, but… we are completing the Humber Bridge Half Marathon Fun Run on 30th June! I shall be waddling my way around the 2.5 mile circuit with T, who is going to do his very very best to self propel his wheelchair around as much of the course as he can. We are hoping to contribute to the Life of Rileys ‘JustGiving’ page that J has set up. I have popped the link below. If you can spare even a few pence, it really would be appreciated. Alternatively, T may accost you with a sponsor form. He’s very excited.

Let’s just hope I don’t go into labour half way round! Ha ha (?)

*I can’t remember Sandras name. So I’m calling her Sandra. The end.